The work of Amy Leibrand otherwise know as “ThisSpace” is beyond imaginable. Such whimsy and playfulness works magnificently with such haunting/ghostly and though provoking wonders. I have been nothing but awe-struck since coming across Amy’s work late last year (2011). I find her pieces transcend originality the mobile photography/art community has yet to achieve. Since, many have taken on her stylized images but none have come close to duplicating thisspace’s brilliance, in a league of her own. 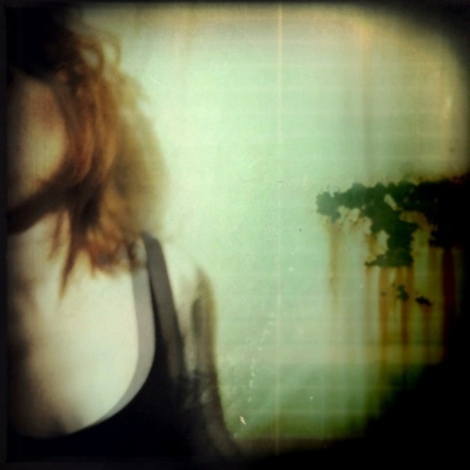 We drove on black streets

With that said, let’s let Amy speak for her self though her words and work…

Edi Caves:  Tell me about yourself? Where are you from?

Amy Leibrand:  My name is Amy Leibrand. I reside deep in the suburbs of Columbus, Ohio. I am a science writer. This is just a fancy way of saying I take data and summarize it.

There is an entire world

EC: What does mobile photography/iPhoneography mean to you?

AL: I’m always looking for something to wrangle and iPhoneography is how I take care of this restlessness. Having a creative outlet in my hands at all times is required. iPhoneography provides the release I sometimes need. It is instant gratification. It is my security blanket.

EC: Can you recall the first iPhoto you took that you yourself were blown away by and made you pursue mobile photography more passionately?

AL: I do, actually. Big Punch (2011) won Juror’s Choice in a group exhibit of all art mediums in Columbus. The photo also was featured on the EyeEm blog. It was shot and processed through Hipstamatic — very simple, really. I received a lot of comments about the bleak of it; the image was one of my first self-portraits. This was about the time I began reading iPhoneography blogs and connecting with other enthusiasts. I started to tinker with other, more sophisticated apps with greater control and capability. This image was the catalyst.

EC: Your images have a real dreamy romantic and surreal quality about them. Can you talk to me about the elaborate production behind your work?

AL: These images are layers and layers of mood packed into pixels. I generally have only a vague idea about a direction to take; my process is heavy with experimentation. Sometimes I use apps in unconventional ways, to manipulate their function. I want to create images the viewer can dissect, a manufactured reality. I pour hours into dismantling images to modify their parts, the uncelebrated parts that make up the whole.

Because of how hard the subject matter was

EC: How often do you work on your iPhoneography? Do you spend a numerous amount of time on working and reworking your photos?

AL: I am always tinkering on my phone with something, even if it is an image no one will see. It is how I waste most of my time.

Descending past armchairs and grandfather clocks

AL: I can be found everywhere these days — Twitter, Instagram, EyeEm, Facebook, Flickr — which is funny because  I’m generally a private person. But the interaction that comes with putting oneself into the mix is energizing. I learn a great deal from other photographers; their perspective motivates growth, their work is inspiring. Also, online networking has led to opportunities to exhibit worldwide. Social media has been crucial to getting noticed outside of my local arts scene. One thing leads to the next leads to the next. Social media is key.

EC: Who inspires you? Who are your artistic influences?

AL: I find inspiration in many things, many artists. A few I turn to frequently are Francesca Woodman, Kristamas Klousch, Ellen Rogers, Robert Rauschenberg, Man Ray, Francis Bacon. I am also inspired by decay and architecture or a combination of both. Rotting buildings, peeling paint. Degradation.

Which pieces belong to what parts

EC: What has been the some of the challenges of using the iPhone as a camera?

AL: Adjusting tiny details is a challenge. I’m a perfectionist. Or try to be. There is a certain degree of imperfection with using the iPhone to shoot and process that must be accepted or else you will drive yourself crazy. I don’t do well with this. I drive myself crazy. I spend far too much time on the parts that no one will notice. I’d like my iPhone images to be indistinguishable from the images I shoot with a DSLR and process in Photoshop. This is not painless to accomplish.

Half does and half does not

EC: Has your work been published before, if so, where? Did you ever expect your work to be noticed by the iPhoneography community?

AL: EyeEm was the first mobile photography community I joined. They approached me early in 2011 about doing an interview for their Spotlight feature — I was stunned. I never gave much thought to what could or would happen if I put myself out there. I just wanted feedback, to see what worked and what did not. The EyeEm feature sparked interest from others, and I was interviewed last fall for i comme Photo and have had images featured on the Life in Lofi blog. It’s surprising and humbling and awesome to be invited to talk about my work.

It can never be taken back once it's given

EC: What’s in your iPhone camera bag (apps)? What are a few of your favorite apps that you’re currently using and which ones don’t you like?

AL: I currently have sixty-four apps. The number frequently fluctuates. I quickly fall in and out of love. I’m fickle. Right now I’m having a wild love affair with Photo fx, Snapseed, Noir, Blender, and Juxtaposer. I tend to like the apps that provide the ability to alter portions of an image (masking). And, the ones that permit fine tuning. Apps that give the user a high degree of control. I mostly stay away from apps that offer limited adjustment or blanket an image with a filter. I want to be able to manage the details. I’m a control freak, probably.

The way nobody was seeing me

EC: Where do you see  iPhoneography/mobile photography in the future?

AL: The technology is getting smarter, more complex, and quickly. I see only good things for iPhoneography. Galleries are taking notice. Some are exhibiting mobile photography alongside traditional photography, even. Such activity and interest provides legitimacy to iPhoneography as an art form. The movement already has traction, sky is the limit. 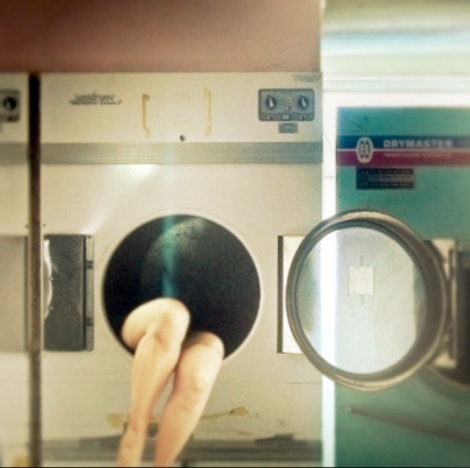 EC: Do you mind telling us how you have created a recent piece of iPhonographic work from start to finish?

STEP 1:  These are original, unedited images (thumbnails) taken through the standard iPhone camera or Hipstamatic. Many, many of almost the same thing. Ultimately, I will superimpose two images to create the final product. 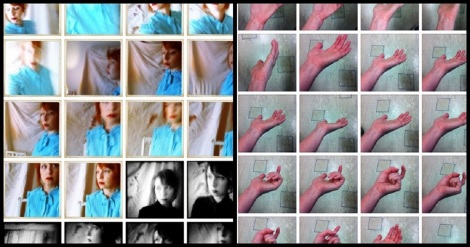 STEP 2: Before superimposing, I process each image separately. Starting with the base image, I use TiltShiftGenerator to apply blur to portions of the photo. TiltShiftGenerator also has sliders to adjust saturation, brightness, contrast, and vignette.

STEP 3: Next, I use Snapseed to adjust the details of the base image. Snapseed offers a good deal of control. For this image I use the “Selective Adjust” tool to brighten an area of the face. I also use “Tune Image” to fine-tune brightness, contrast, saturation, and white balance. Snapseed has other tools and filters, including a “Vintage” tool, which I use to lightly apply texture and grain to the image. 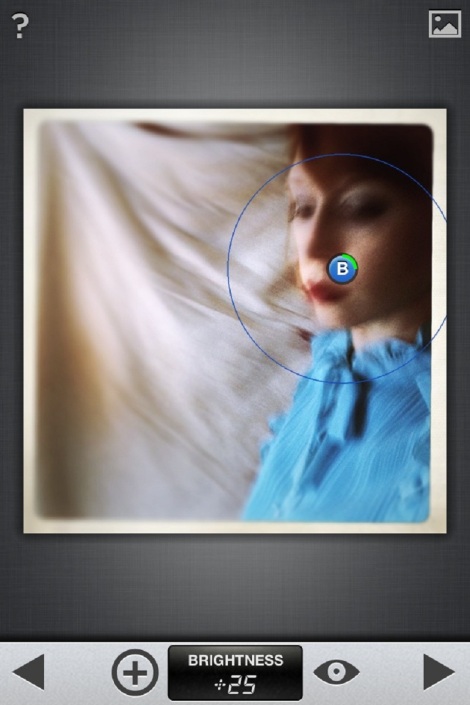 STEP 4: Using Photo fx, I make adjustments to the atmosphere of the base image. Photo fx allows the user to mask portions of an image so that modifications are targeted. This app has an enormous number of filters and grains, and color and lighting effects that I use to add mood to the image. Photo fx is my secret sauce.

STEP 5: I revisit Snapseed for additional tweaking with contrast, and use Photo Factory to darken shadows. Photo Factory is especially good for adjusting highlights and lowlights. 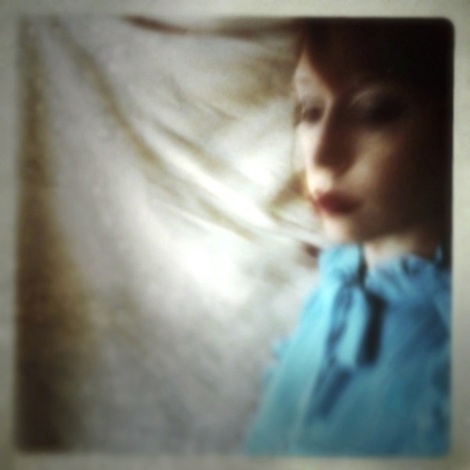 STEP 7: Using iDarkroom, I add a filter to adjust color/tone. There are many apps similar to iDarkroom; this one leans toward the vintage mood. Here, I add an iDarkroom filter to the image, save the image, load the saved image back into iDarkroom, apply a second layer of filter, and repeat until I have achieved a satisfactory result.

STEP 8: Next, I tackle the overlay image that will be used for the final superimposed image. Using iDarkroom again, I repeat Step 7 with the image of the hand.

STEP 9: In Snapseed, I tweak the details of the overlay hand image. 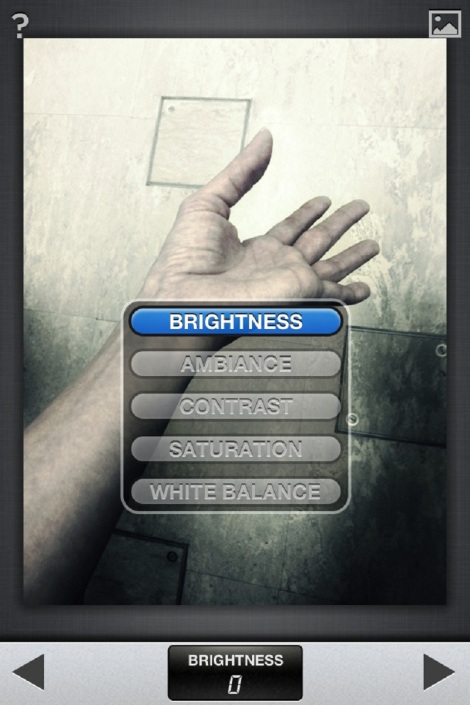 STEP 10: Using Juxaposer, I superimpose the hand over the base image. The primary tool in Juxtaposer is the eraser, which removes portions of the top image. Juxaposer also allows you to flip the top image, which I’ve done here.

STEP 11: After using Juxaposer to combine the two images, I use Photo fx to apply final details like tint, diffusion, and vignetting. 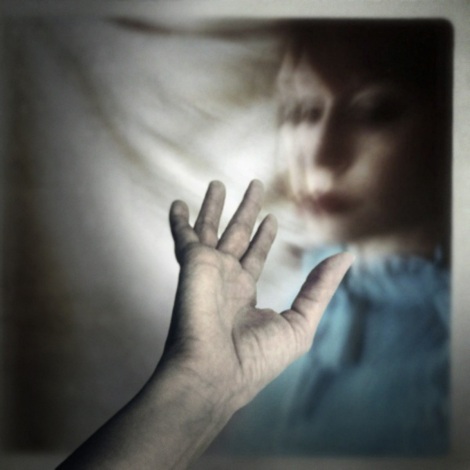 The actual process is considerably more time-intensive. Generally, I develop many variations of the same image using a slightly different approach for each. I usually end up with five to ten final versions before choosing “the one.”

EC: WOW, Amy that’s an intense workflow! Thanks so much for letting us into your process!

Thank you again Amy, for participating in this feature here on iPhoneogenic, our our Facebook Page, Twitter, and Instagram. I’m so happy to have had the opportunity to get to know more about you and honored to have you share your work here on the blog.
For more on Amy check out these links:

All images shown here are copyrighted property of the artist and are published on all iPhoneogenic outlets with the consent of the artist, please contact Amy Leibrand for copyright privileges.

Leave a Reply to ... Cancel reply