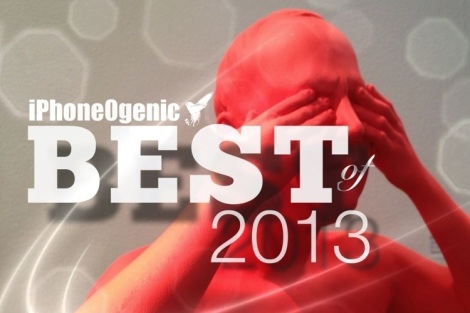 2013 was another brilliant year for the mobile photography and mobile artistry movement and iPh0 had the pleasure to view many of the best the medium has to offer in the iPhoneogenic Flickr Group. Throughout the year iPh0 collected these artifacts and presented them in monthly round-ups here on the blog. The Flickr group presented over 58 thousand images alone in 2013, which shows the vast number of people that are creating on their mobile devices. It is also an indicator of how difficult it is to curate a showcase like this year-in and year-out! Of those 58 thousand images only 336 images were selected throughout the year.

Like last year, iPh0 has put together the year end crème de la crème of Top Images on the blog. From the 336 images, 50 images were selected to be apart of the best of 2013. But there were just way too many stellar image iPh0 could just not pass on so, the collection amounts to a total of 60 stunning images. These images represent what it takes to be featured on iPhonegenic’s monthly collections. That’s an image that speaks volumes, contains craftsmanship, tells a story/moving, uniqueness, shows hidden gems, and overall an eye popping visual impact.

The images below do not represent an artist’s particular style, but merely what was said above as criteria for its selection.

Because iPh0 feels these images are all so awesome there is no lead, they are all just that brilliant on their own!

Clicking on an image will redirect you to the artist’s Flickr photostream.

I hope you enjoy the year end collection and find some inspiration here.

Thanks to all who submitted to the iPhoneogenic Flickr Group. You made the year end selection process very tough. Please keep them coming in the new year!

THANKS FOR A GREAT 2013! (Apologies for the delay in presenting this, wanted to get this right!)

mind overseas / feet in the past by krapoz

Human after all by Cedric Blanchon

These Birds Are Real by Lea Zimany

patience is the art of hoping by Janine Graf

The Grape by Marie Matthews

Light and shadow by Thomas Kakareko

“So let the mind flow like water. Face life with a calm and quiet mind and everything in life will be calm and quiet.” – Thich Thien-An by Cindy Patrick

Over the city by Ali Jardine

Does it make you happy now? by Masaki

I Am Free, That Is Why I’m Lost. by mutablend

Around and Around by Susan Tuttle

Can you hear me! by Paula Gardener

Asleep Behind The Wheel by Susan Blase

Cleaning up 3 by Karen Divine Boulder

“To avoid criticism say nothing, do nothing, be nothing.” – Aristotle by Tuana Art

Express Yourself by Brandon Kidwell

Walk away by Michał Koralewski

Hare Krishna 1 of 4 by Robin Pope

Be social and share these amazing works with your friends by using our convenient social media buttons below!